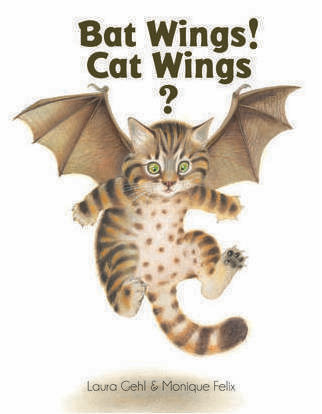 Bats have wings, but do cats? No, of course not! In this entertaining book designed to both instruct and delight, young audiences encounter actual animal traits paired with impossible ones. Or what if they're not all far-fetched?

“Why do animals have the physical attributes they have—and not others? Everyone knows that a moose has antlers, but a goose does not. It’s the same with the rest of Gehl’s rhyming animal pairs:Clams have shells, but lambs don’t; an eagle has a beak, but a beagle doesn’t; bats have wings, but cats don’t; a hog has a snout, but a frog doesn’t; a grouse has feathers, but a mouse does not. The final set breaks the pattern: A kangaroo has a pouch, but you and I don’t…except “maybe sometimes.” The turn of the page reveals a baby sweetly tucked inside their parent’s cozy sweater-cum-pouch (both present White). The text is terse and patterned: “Moose antlers? Yes! / Goose antlers? No!” Each pair is positioned on a double-page spread, the silly one always appearing on recto. The animals are done in what looks like watercolors and pastels, realistic except for the absurd appurtenances on the second animal in each pair. The artwork belies the reductivism of the concept. Several of these animals will not be familiar to very young children, and they are unlikely to understand the weirdness of showing antlers on a goose’s back instead of wings, or the lamb’s shell ears. Aside from a response of wonder or incredulity—and the thrill of yelling No at the book—it is hard to imagine what a child would glean from reading this or how a caregiver would attempt to meaningfully explain the concept. Mildly humorous, attractively illustrated, but too slight to be of significant value. (Picture book. 3-5)”