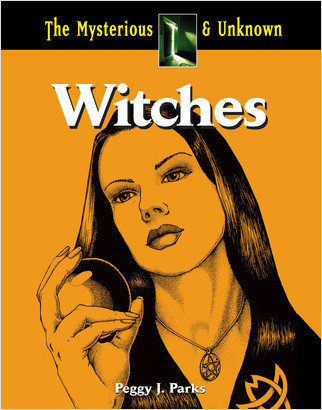 From the Series The Mysterious & Unknown

Are witches real or merely the imaginings of hysterical minds and irrational folklore? Witches have been a source of fear and fascination for thousands of years. This title traces the subject of witches from ancient times through today, and also explores the massive witch hunts that ended in the executions of thousands of alleged witches.

Gr 6-9-The lack of scientific evidence of alien abductions means that any nonfiction book on the topic will rely heavily on unverified stories. Therefore, though Alien Abduction tells some good tales, it struggles to fill a 100-page book with substantial information. Witches traces the history of so-called witchcraft from the Middle Ages through the Salem witch trials, detailing the torture methods used on the accused. The final two chapters deal with the Wiccan religion and modern-day practices. Although Parks states that the two movements are not the same, readers may be confused since some Wiccans call themselves witches, and members of both groups claim to cast spells and use magic. The book’s tone is matter-of-fact, even when discussing how these people cast spells, tell the future, and communicate with spirits. Only the final two paragraphs mention the absence of scientific proof that witchcraft is real. UFOs, the strongest of these titles, combines numerous stories of sightings with historical and scientific details about investigations, providing a balanced view of a controversial topic. In addition to well-known happenings such as the Roswell incident and the crop circles of the 1970s, Stewart includes some intriguing new cases from the last decade as well as information on what our government and the scientific community are doing (or not doing) to investigate UFO activity. Colorful illustrations and appealing design will encourage readers to pick up these accessible books.-Marcia Kochel, Olson Middle School, Bloomington, MN