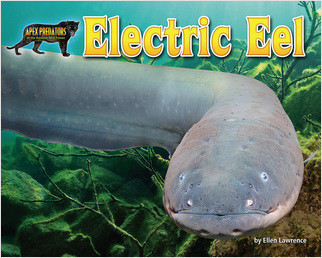 From the Series Apex Predators of the Amazon Rain Forest

A long, snakelike creature moves slowly through the waters of a muddy river in the Amazon rain forest. It’s an electric eel on the hunt. The hungry creature swims closer to a large piranha. As it nears its prey, the predatory eel releases a burst of electricity. Six hundred volts of power enter the fish’s body, stunning the animal so the hungry eel can gobble up its electrifying meal!

Filled with information perfectly suited to the abilities and interests of its primary grade audience, this colorful, fact-filled book gives readers a chance to learn about the lives of apex predators that can produce electricity inside their bodies. The book will also help readers develop their powers of observation and challenge them with activities and critical-thinking questions about the electric eel’s physical characteristics, its everyday life, and its hunting skills.

Apex Predators of the Amazon Rain Forest: Electric Eel stands out among books about predators because of its engaging formatting and its questioning strategies that propel the reader forward through the texts. In addition, it has clear, crisp photographs that are closely paired to the text to give young readers a good introduction to this predator. The vocabulary is limited enough for the target audience, but has some adaptation specific vocabulary to enrich the reader’s knowledge. The text features are well formatted for young readers. I would use this text to allow students to gather information about animal adaptation and sensory processing. I think that it provides good information to support students’ understanding of core ideas in animal behavior. It would also support using text features for research and synthesis of information. Because this text is part of a series of similar texts, it would be a great classroom addition for shared research.

Each featured beast fills an apex predator role in the rain forest ecosystem. Content focuses on predation in the first half, including the subject’s diet and hunting methods, with photos that show some of the action of the hunt. Life cycles and habitats are also introduced. Writing is clear and direct, avoiding generalization. Readers learn, for example, that a bull shark is an apex predator in the Amazon, but not in the ocean. . . . Captioned photographs highlight key physical features, while occasional close-ups and insets also support factual details effectively. Other features include a range map, a “science lab” activity, and question boxes that actually promote critical thinking, rather than repetition of facts from within the text. VERDICT: Well-rounded species profiles suitable for reports.