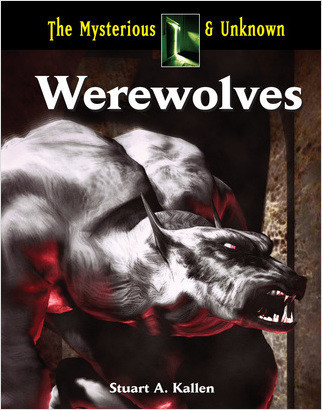 From the Series The Mysterious & Unknown

By some estimates there are 250 werewolves living in North America alone. This book examines the myths and facts about the snarling, supernatural shapeshifters that transform from human beings to ferocious wolves by the light of the moon.

Angels, King Arthur, and unicorns have all been subject to the Mysterious & Unknown series, which continues to put its magnifying glass to humankind’s biggest question marks. Although the books may look standard at first glance, they are surprisingly exhaustive. Werewolves takes a subject virtually no one believes in and provides a deep historic background, ranging from the Aztecs’ nahual, the Philippines’ aswang, and Louisiana’s rougarou. Lore esoterica (Norway and Sweden myth suggests that it’s possible to become a werewolf by sipping rainwater from a wolf’s paw print) mixes with true tales of hypertrichosis and feral children. A final chapter details how to ward off, cure, or kill werewolves—y’know, just in case. Breakout summaries and quotes enliven the layout, and though illustrations of enticingly described evidence are sometimes omitted, there is still plenty of creepy stuff to scrutinize. Extensive notes and indexes conclude. — Daniel Kraus