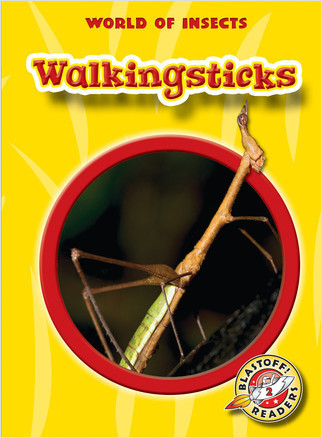 From the Series World of Insects

Do you think you could spot a walkingstick on a tree branch? Walkingsticks are able to camouflage themselves so completely with their surroundings that some develop leaf-like veins on their bodies. This book introduces how these amazing insects live, hide from predators, and find food.

“One or two sentences of large-print text appear under a full-color, full spread photo of the featured animals. Each title focuses on its insects’ outstanding physical and behavioral characteristics, succinctly describing major body parts and, in Crickets and Grasshoppers, the production of sounds to attract mates. Typical diets are also mentioned in all of the titles except Crickets. A half dozen or so terms appearing in boldface are defined in the glossary, which offers additional details on some of the topics addressed. The photos are wonderfully detailed close-ups of one or more representative insects, with body hairs, bristles, grains of pollen, etc., clearly visible. Particularly good is the shot of a fully extended cricket leaping out of range of a lizards gaping mouth. While all four titles are clearly written, the amount of information, as well as the range of topics covered, is limited. Melvin Berger’s Chirping Crickets (HarperCollins, 1998) and Patrick Merrick’s Walkingsticks (The Child’s World, 1997) are more detailed, albeit on a slightly higher reading level. In addition to covering major characteristics, they describe the insects’ life cycles, molting, and special characteristics of several different species. However, as there is little information on these insects for this age level, Green’s beautifully photographed beginning readers will be useful introductions.”